Tonight I am in Phoenix.

No, that was last week.

Today I am in Minneapolis.

No, that was two months ago.

Tonight I am in Charleston. Well, kinda that but a few miles northeast. I am in South Carolina-my birth state.

I am here to care for my sister who just had back surgery. She is older than I am in real person years. She is younger than I am in Type 1 diabetes years

But she knows the drill.

Telephone your sister in the next room because you are….

That wouldn’t be so bad except earlier today it was 45.

And yesterday it was 48.

And mixed in with those numbers were some 380’s.

The symptoms are bad and glucose tabs aren’t helping. Prune juice is good for old-lady bowels but not a quick solution for blood sugar levels.

Orange juice might work, but too many liquids can be counter-productive with lows. Says she who once projectile-vomited a second glass of juice over a friend.

So I grab my brother’s stash of honey and feed it to my sister teaspoon by teaspoon.

40 minutes later her BG recovers to an acceptable number in the 90’s. What would have happened if I hadn’t been there? Only D-parents and T1’s in “The Club” know the honey trick.

The visiting nurse came the next day and asked if we had called the doctor after the bad low. Huh? Why would we call the doctor?

Her way has worked for her. At least she thinks so. Quitting smoking and major surgery have exposed flaws in her care that need facing. At least I think so. 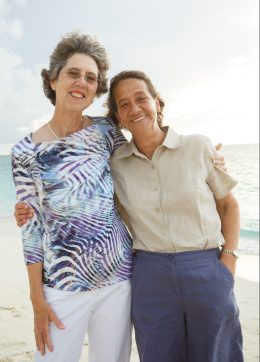 Meanwhile as I was slogging through my sister’s health stuff, my Type 1 screamed out for attention.

My pump’s rechargeable battery failed with an overnight drop to 15% charge one night and 5% the next. Out of town and a holiday weekend to boot. Kudos to Tandem as a replacement pump was shipped from California and arrived in South Carolina within 24 hours.

They are not my choices. But I have my diabetes and she has hers.

I am headstrong and have been known to be pushy and a PITA.

I was helpful for nine days.

Both my sister and I were glad to hug good-bye on Thursday and not try for day number ten….

The Story: Two weeks ago my sister had major lower back surgery. Despite the number of times that she told the neurosurgeon and his medical team that she has Type 1 diabetes, the hospital orders specified a Type 2 regimen and she was not given long-acting insulin. Holy sh*t! This is a teaching hospital in 2018. I had offered to come for the surgery but my brother wanted me there for the recovery and promised to keep her alive in the hospital…. Thanks to a nurse advocate, he did.

My sister and I have always handled our diabetes differently and we’re both relatively healthy after my 41 years and her 37 years. My 2013 interview with her continues to be one of my most-read blogposts.

I accept that my sister will not use a pump or Dexcom CGM, both of which would be covered by Medicare at no out-of-pocket cost. The one thing I will continue to argue for is a Freestyle Libre. It is physically and emotionally less invasive than other CGM systems and possibly something she could live with. Although I appreciate the safety from middle-of the night Dexcom alarms, my sister doesn’t want that. I think that she would quickly appreciate the ability with the Libre to frequently scan her arm to see BG readings, 8-hour trends, and directional arrows. Had the Libre not required a physician prescription I would have purchased it, stuck in a sensor, and made her use it.

So Sister, I’m not giving up. Check it out!

A Libre is covered by Medicare under part D prescription benefits.