I started using a Tandem t:slim X2 insulin pump in December 2016 and immediately began having occlusion alarms once or twice a week. I had never had occlusions in 12+ years of pumping with Medtronic and Animas and quickly discovered that the vast majority of these Tandem alarms were false. All I had to do was dismiss the alarm, resume insulin, and go about my day. I can count on one hand the number of times that the occlusions were real and required a cartridge and infusion set change. It takes more than one hand to count the times that I had an embarrassing blaring alarm in awkward situations such as the movies, yoga class, and restaurants.

If you do an online search for Tandem Occlusion Alarms, you will be linked to some of my older blogposts. People still contact me with questions about their occlusion problems and I figured it was time to update my experiences and thoughts. 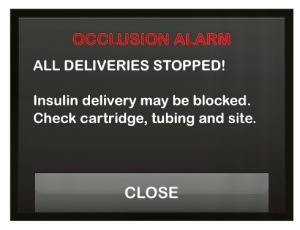 Although some of my previous blogposts suggested that I had fixed the problem, I never found a permanent solution to false occlusion alarms with some of my X2 pumps. I was fortunate that I wasn’t someone who had multiple alarms a day requiring cartridge and infusion set changes. The alarms were annoying and I mostly learned to live with them. Occasionally I called Tandem out of frustration but after a while they had nothing new to tell me and no real solutions.

If you notice in the last paragraph I say “some of my X2 pumps.” I am on my fifth pump in 3-1/2 years. My first pump had occlusion alarms starting the first week and was eventually replaced due to a failed battery. The second pump did not have a single occlusion alarm during the month that I used it, but the t:button was defective. The third pump had lots of occlusion alarms and was replaced for that reason. The fourth pump had one to two occlusion alarms per week and I gave up on solving the problem.

In January 2020 I started using Dexcom G6 and wanted to install the newest Basal IQ update. It was determined that I had one of the older pumps with software that was incompatible with the Basal IQ and Control IQ updates. So I got another replacement pump. Amazingly several months went by with no occlusion alarms. I didn’t change anything in my behavior, cartridge use, or infusion set type. Through luck of the draw I finally had a pump that was not prone to false occlusion alarms. In the last 6+ months I have had 3 occlusion alarms all probably attributable to bunched up tubing during a mealtime bolus.

I have long believed that some Tandem pumps are more prone to occlusion alarms than others. Is it an overly sensitive sensor or a less than robust motor? I’m not an engineer and have no idea. I have more than once been annoyed by people online being virtuous that they aren’t getting occlusion alarms and that I must be doing something wrong. Some times I felt as though Tandem techs blamed me.

No, maybe it was just the pump.

If you’re dealing with occlusion alarms, the best place to start might be with some of the “best practices” recommended by Tandem support techs and other X2 users on Facebook. Some helped me, some didn’t, and some I refused to do.

I don’t necessarily do all of those things and some of them made no difference in the number of my occlusion alarms. With only one to two alarms a week, I got very good at #8 and just lived with the alarms. I currently wear my pump on my waistband with a Nite Ize clip and use TruSteel infusion sets with Novolog insulin. But that’s what I did with the 3rd and 4th pumps that had lots of occlusion alarms. I dislike the size and weight of the case and don’t use it. I don’t change my cartridge every three days although I change my infusion set every two days. I rarely hold the tubing straight during a bolus.

So I live with a mixture of best practices and bad practices. I used to get a lot of occlusion alarms and now I don’t.

I hope that this blogpost is my last discussion of occlusion alarms. If you’re interested, here are previous posts on the subject: