I was introduced to Ann Wallen for the first time in 2012 at a diabetes meet-up in the Minneapolis area.  We talked a bit that evening and several more times at other Twin Cities social gatherings.  Ann’s plus-one is a white standard poodle named Lily who is a Diabetes Alert Dog (DAD).  Asking a few questions, I found out that in addition to using a DAD, Ann is a trainer and consultant for other diabetics looking to add a DAD to their diabetes arsenal.  When I saw Ann this spring, I asked if she would be willing to let me interview her for my blog.  She readily agreed and in May we met for lunch followed by a walk around Minneapolis-landmark Lake Harriet.

I am fascinated by the fact that certain gifted and well-trained dogs are able to reliably alert people with diabetes to highs and lows.  Although I am for the most part hypo-unaware and am an avid dog-lover, I don’t believe that I have the need for a DAD nor do I want the work and responsibility of one.  My Dexcom G4 Platinum CGMS is incredibly effective in protecting me from severe and debilitating lows.  I test enough that I don’t need a dog to tell me that my BG is soaring high and out of range.  (More on that later.) Abby the Black Lab is 8-years old and well past the age that it would make sense to train her.  Believe me, Abby has never shown the least interest in my blood sugar anyway.  But as I said before, I’m fascinated by DAD’s and regularly read My Crazy Life With My Diabetic Service Dog, Tarra’s blog about Duchess, and Black Dogs Rule about the two black labs who keep Stella safe.

Ann’s Story:  Ann was diagnosed with Type 1 diabetes twenty-six years ago in 1988, a few years after a difficult pregnancy and a 10+ pound baby.  She walked into her doctor’s office with the self-diagnosis of Type 1 diabetes.  He laughed at her and then reconsidered his hasty opinion after seeing a BG of 650+.  In typical Ann-fashion, she refused to go to the hospital and some kind soul at the International Diabetes Center stayed late that evening to teach her how to inject insulin.

Years later Ann gradually began losing the warning signals of low blood sugar and by 2004, she was totally hypo-unaware.  Rapid and undetected drops in blood sugar 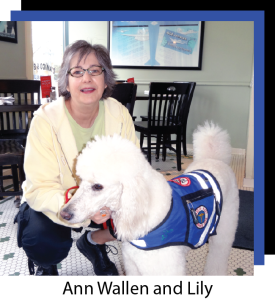 increasingly left her incapacitated and afraid to leave home.  Like many people who used insulin in the days of animal-based insulins, Ann wonders if pumping with the modern “-log” insulins that lack c-peptide is responsible for her severe hypo-unawareness.

There are few diabetes stories where Scott Johnson doesn’t end up in the footnotes and  Ann Wallen’s story is no exception.  Many years ago Ann read a blogpost by Scott describing the new life gifted to his friend Molly as a result of the daily miracles performed by her diabetes alert dog Dixie. Inspired and excited, Ann contacted Molly to learn more about how dogs could enrich and save the lives of people with Type 1 diabetes.  Thus began Ann’s journey into what was then the very small world of diabetes alert dogs.

The organization through which Dixie had been trained was no longer involved with diabetes and Ann came up empty-handed in her search for help in obtaining an alert dog.  Let me re-phrase this.  Ann came up empty-handed in her search for help in training her own dog to be an alert dog.  In 2009 Ann went to see a trainer in Texas and spent six weeks working with scent samples to teach Lily to recognize out-of-range low and high blood sugars.  Ann indicates that this woman was a very gifted trainer, but when she and Lily returned to Minnesota, Lily had not yet started to alert.  One month later while on a trip to Fleet Farm, Lily successfully pawed Ann to a low BG of 62 and has been alerting to highs and lows ever since. (Only those who live in the heart of the Midwest will appreciate the cachet that the mention of Fleet Farm adds to any story.)

Ann and her business partner Diane have dedicated themselves to training alert dogs in their Scent Angels partnership.  The two women have been friends for over 30 years and initially crossed paths through their involvement in horse training. Diane is the principal

trainer and trains one dog at a time in her home.  She has successfully placed nine DAD’s since 2009.  Ann heads the owner training program and consults with people who want to train their own dog to alert.  I encourage you to check out the Scent Angels website to learn more about these incredible women and the even more incredible dogs that they have trained.  Ann and Diane work hard to be flexible and to evaluate the needs of each individual client.  At the same time both women believe that diabetic alert dogs are not the solution for every person with diabetes.  You can find contact information for both Diane and Ann on the Scent Angels website.

Who should get a DAD?:  Voicing strong opinions on this subject, Ann said that diabetic alert dogs should be provided to people who need them, not just those who want them.  Each potential client needs to have tried using a continuous glucose monitor (CGM) and found that it either doesn’t work for them or provides inadequate protection.  Some good candidates are like Ann with blood glucose that crashes too quickly for a CGM to track.  Because only about 30% of these dogs alert at night, a DAD is not a reliable solution to nighttime hypoglycemia.  The client must have a job or life situation that allows the dog to be with him/her at all times.  Ann believes that children are not good candidates for alert dogs and Scent Angels will not work with children.

What is the hardest part of using a DAD?:  Ann indicated that dealing with the public is often her biggest headache.  She is very open to discussing her dog with others, but does not want others to pet or distract Lily without permission.  Ann is extremely knowledgeable about federal law and Minnesota statues regarding service dogs.  She is rarely questioned about her right to bring Lily into any establishment in Minnesota.  She always carries documentation to support her rights for the rare times that she is challenged and she always researches the service dog statutes for any state that she visits.

What is the best part of having a DAD?:  Without hesitation Ann replied “The return of my independence.”

Interesting, but not necessarily related thoughts on diabetes alert dogs:

Conclusion:  Thank-you, Ann, for giving me the chance to tell your story.  Spending time with you, it is easy to see how much Lily enriches your life.  Through your work with Scent Angels, you are an inspiration to and an invaluable resource for other people with diabetes.  I look forward to spending more time with you in the future both on dog walks and at local diabetes meet-ups. 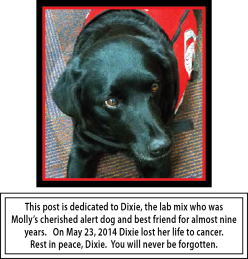 3 thoughts on “Getting to Know Ann Wallen”