I had anxiously waited for several months to get my new OmniPod PDM and smaller pods.  When they finally arrived I was very excited, but decided to finish using the old pods before starting the new ones.  On the advice of a friend I did save one pod in case something happens to the new PDM, so I can use it with the old PDM before a new PDM replacement arrives.

I started using my new PDM and pods five days ago.  During the setup, I was instructed to put in my ID Name, so I put in Sue.  Now every time I turn on my PDM, including when I insert a test strip for a blood sugar check, I see this screen:

I wondered what could possibly be the reason for this extra step before using the PDM?  Have there been people using the previous PDM who used someone else’s PDM by mistake?  Shouldn’t they give us a way to shut this feature off if we so desire? My son, who also has type 1 diabetes, lived with us until 3 months ago.  He uses the Medtronic pump, but if he used the OmniPod pump, we would have used different colored gel skins to differentiate them. That would have been easy enough to do, because I have four gel skins-two white, a lime green and my new black one that came with my new PDM. 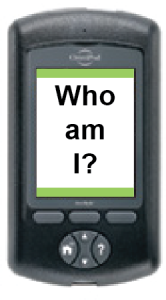 Now I’m the only one in the house who has diabetes, so there is zero chance of someone else here wanting to inject insulin.  So I decided to call Insulet Customer Support and ask if there was a way to turn this feature off.  I was told that no, there is no way to turn it off (in other words, suck it up).  I asked the reason for this feature, and was told that there are some families with more than one person with diabetes using the OmniPod PDM, and they added this feature to eliminate confusion.   I guess it never occurred to them to tell those people to use different colored gel skins on their PDMs.

OK I’m trainable, and I’ll get used to this extra step, but it still seems silly to me.  But on second thought, since this pump is not attached to the body like the conventional pumps, I suppose they are trying to eliminate any chance of being sued.  I sure hope no one has already tried to sue them for this, because I do love the company and their new smaller pods and hope they continue to stay in business until there is a cure for diabetes, quirky PDM and all.