I have been using the Animas Vibe for two months. I believe that the decision to upgrade from my two-year old Ping was a good one and I am content that this will be my pump until the warranty expires in November 2016. The basis of this satisfaction surprises me because the reasons I like the pump have little to do with why I thought I wanted it.

In November 2012 I made the decision to purchase the Animas Ping because it was in line to be the first pump integrated with a Dexcom CGM. Despite poor results with the Medtronic SofSensors, I had really liked the integration of CGM data into my Revel pump. After using a Medtronic pump along with a Dexcom CGM for several years, I strongly believed that I wanted a single device merging my insulin pump and CGM.

When the Vibe was finally released in January 2015, I began to question the wisdom of following through with the upgrade. I was concerned that the CGM software was already out-of-date, that future Dexcom transmitters would lack compatibility with the Vibe, and that I might have insurance problems getting a new CGM system because the Vibe functions as a CGM receiver. After meeting with an Animas Rep in early February, I made the decision to follow through with the upgrade. You can read about that decision and my early impressions of the pump here.

After two months, I am happy with the Vibe as a pump, but I am back to using the Dexcom receiver full-time. In my opinion, the Vibe gets a poor grade as a SYSTEM in real time and earns a good grade in reviewal made. To clarify, the integration of the CGM into what is essentially an Animas Ping pump is clumsy and occasionally nonsensical when it comes to the decisions/actions that I make with my pump and CGM on a daily basis. It is difficult to move from the CGM functions of the device to the insulin pump functions. Unlike the Medtronic “system”, there is no meter that sends BG numbers automatically to the pump. At the same time because I can download the Vibe to Diasend along with my BG meters, Dexcom receiver, and now even my Fitbit (!), I have a great platform for merging and reviewing my diabetes and health data.

In a January review of the Vibe, Mike Hoskins of Diabetes Mine mentioned that his Animas trainer talked about the Vibe “in terms of a dwelling — the two components used to be separate housing units, but now they co-exist under the same roof and are more like different rooms within one big home.” That is a great image, but I take it even further to say that the Vibe is a duplex with the pump in one unit and the CGM in the other. They are adjacent to each other, but they have separate entrances and there are no adjoining doors. To get from one device to the other, you must go outside and walk down the sidewalk to the other side of the building. Rather than adding value to each other, I find that the CGM part of the Vibe makes the pump functions more cumbersome than they are when the CGM is disabled. 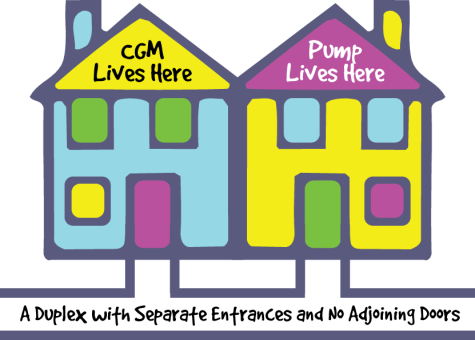 The only time that the Vibe works well as a system is when all of my devices have been downloaded to Diasend. In reviewal mode, it is a success because I can see reports merging  pump and meter data with my CGM. Unfortunately it is time-consuming to download everything (especially the Vibe) to Diasend, so it is unlikely that I will do this frequently. I am starting to get a little cyborg excitement envisioning an Apple watch showing real-time Dex tracings, Fitbit steps, and insulin pump data. A brave new world for sure and definitely not what the Vibe delivers.

In the next post in this series, I will write about how the Vibe functions as a CGM device and talk about what I consider some of the shortcomings of the Dexcom integration. Part 3 of the series will highlight my views on the Vibe as a stand-alone pump.

As a hint of what is to come, I like the Vibe as a pump. At the same time, I have become comfortable with the idea that longterm my CGM data is going to end up on my phone, Apple/Pebble watch, or some other device. Unless the CGM integration improves the function of the pump and does more than be a poor replacement for a Dex receiver in my pocket, a pump/CGM combo doesn’t seem to add much value to my diabetes life.