After eight years of using Medtronic pumps, I switched to the Animas Ping in 2012 to be eligible for the $99 upgrade to the highly anticipated Animas Vibe. I am totally committed to Dexcom and the Vibe was in line to be the first pump released in the US with Dexcom integration. Two-plus years later the Vibe has finally been approved by the FDA and is actively shipping.

I ordered my upgrade before noon on the first day that Animas accepted orders. Many people are getting delivery of their pumps, but I haven’t heard a peep. Did everyone order before me or is it because my Ping was supplied through Edgepark rather than directly from Animas? I have no idea how Animas is determining shipping order, but I hope that I have not been lost in their system. “Call Animas” is on my To Do list.

Last week I picked up the phone to contact Animas and then stopped. Do I really want the Vibe?

The Vibe (as will the t:slim/Dex integrated pump) is based on the Dexcom G4. The recent G4AP (Artificial Pancreas algorithm) software update will not be included nor will any future improvements in the Dexcom platform.

Unfortunately when a pump/CGM combo is approved by the FDA, the device is “frozen” in time with the hardware configuration as approved. I don’t know how software updates are handled by the FDA, but one source told me that the Vibe as configured will not allow software changes. Now that Dexcom has multiple hardware and software upgrades in the pipeline, a 4-year (or for me a 2-year) commitment to an older version of the Dex might be a bad decision. In the short run I can keep using my Dex receiver to access the new software. The just-released Share receiver will also be an option because it is compatible with the current generation of transmitters.

Now a word on the “current generation of transmitters.” Vibe purchasers new to CGM are being sent the high-profile Dex transmitters that were replaced by smaller transmitters a few months ago. I assume that the Vibe was submitted to the FDA with the old transmitter and wonder if it will take another FDA submission to change that. Fortunately the only difference between the transmitters is size although I personally can’t wait to get the small transmitter when my warranty expires in February. The new transmitter is compatible with the Vibe.

Dexcom is already talking about the next generation G5 transmitter that will have the ability to communicate directly with cell phones without the use of a receiver. The G5 mobile system transmitter will not be compatible with the Vibe. 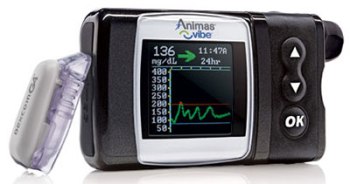 My Animas warranty expires in December 2016 and I should probably just get the Vibe. The fact that it will populate the recommended bolus rather than scrolling up from zero is a huge improvement. Because I will pay the upgrade fee out-of-pocket, technically my insurance company shouldn’t know that I have the Vibe and then potentially refuse reimbursement for a Dexcom receiver when that warranty expires in August.

Unfortunately it seems that nothing is private when it comes to medical things. My doctor has to write orders for the Vibe and I wonder if Edgepark will be the shipper rather than Animas. Somehow I believe my insurance company will end up knowing about the switch. Maybe I am just being paranoid. Everyone else has been assuming that they will have no problems continuing to use the Dex receiver if that is their choice. But I think that many of us will see the day when insurance companies refuse to cover the cost of CGM receivers because we have pumps functioning as receivers.

I have not yet read one review of the Vibe that is overwhelmingly positive and I know of one person who has already returned it. Kerri Sparling’s preliminary review was the closest to being positive because she didn’t address any of the negatives. She promised a more complete review later and I will be interested to see what she writes. She is upfront about her sponsorship relationship with Animas and you can trust her when she says that her opinions are not for sale. Another Ping user, Sara at Moments of Wonderful also wrote about looking forward to receiving her Vibe. In my opinion anyone who has been using the Ping (except for fans of the Ping meter/remote) will most likely see the Vibe in a more positive light than users of other pumps. There is a definite learning curve to adjusting to the idiosyncrasies of Animas pumps.

Most non-Ping reviewers of the Vibe have been highly critical of the poor menu system, the low resolution color screen, the lag time of button pushes, and other negatives. I believe that Johnson & Johnson missed the boat by not starting from scratch when designing this pump. IMO Mike Hoskins of Diabetes Mine summed it up best:

my honest final verdict is this: the Vibe feels like an outdated, counter-intuitive medical device that seems like it would have been more relevant if released several years ago as promised. Today, it doesn’t feel innovative, but rather like a device that’s filling a market need for choice only because it promised that a long time ago, and it’s “better late than never.”

When I purchased the Ping, I underestimated how much I would hate the menu system and how long I would regret the decision. Because I have no option to change pumps until 2016, my feelings about the Ping are inconsequential as I make my upgrade decision. Frankly two years after the purchase, I have to admit that I have become a whiz at moving through the menus; the scrolling and button pushes have become second nature and I rarely think about them anymore. But it took a long time. The Ping has been a workhorse for me with no technical problems in two years. (I had my pump replaced once due to cracking of the battery compartment, but it was a quick process with good customer service.) Another important feature of the Ping is the waterproof guarantee. With the Vibe I like the idea of having a waterproof CGM receiver.

So what am I going to do? Today I am meeting with an Animas rep to get a hands-on look at the Vibe. Some early reviews have criticized how many button pushes it takes to access the CGM info and how slow the pump moves from screen to screen. The display is small and a different shape than the Dexcom receiver. If I upgrade, will I even use the CGM part of the pump except on an occasional basis? Is it worth $99 to populate the bolus recommendation with the push of one button? Will I be able to see the Vibe CGM in the sunlight because I find it impossible to see my Ping screen when hiking? (The Dexcom is bad in the sun; the Ping is worse.) Is there a risk that when my Dexcom receiver goes out of warranty that my insurance will not approve a new one because the Vibe functions as a receiver?

Had Animas contacted me about shipping the Vibe a few weeks ago, I would have jumped on board immediately. Now I am not so sure.

I’ll keep you updated on what I decide. I wish that I felt excited about getting the Vibe and maybe I will be once I make the decision. At some point I need to contact Animas. Or maybe they will get in touch with me….

If you’d like to read recent reviews of the Vibe, here are some to check out:

Kerri Sparling at Six Until Me

Melissa Lee at A Sweet Life

Mike Hoskins at Diabetes Mine

Sara Nicastro at Moments of Wonderful

19 thoughts on “The Vibe: Should I Upgrade?”