I had a great day planned for December 31.

I started the day by meeting my oldest son and his three children at McDonald’s. The kids ate a breakfast of varying portions of scrambled eggs, sausage, and pancakes. (Health Alert!!! I bought the fruit cup once and no one would eat it, including me. I now save my money and leave vegetables and fruit to lunch and dinner.) The kids had a fabulous time playing on the indoor playground and I got a rare opportunity to catch up with my son one-on-one. After almost two hours we headed to their house so that I could see the wondrous things that Santa had brought.

Next on my agenda was lunch with a couple of D-friends. One of the attendees was Ann W. accompanied by her diabetes alert dog (DAD) Lily. I wrote a blogpost about Ann in July 2014. Also coming was Kathy P. who used to write a blog called Purple Haze but now mostly hangs out on Facebook and TuDiabetes. And drumroll please! This was going to be my first opportunity to meet Molly K. and her new DAD, Hope, who were in town from Wisconsin.

At 11:30 I went out to my car to drive to the restaurant in the Uptown area of Minneapolis and unfortunately was greeted with a flat tire. (I had heard a bang on the highway back from McDonalds but didn’t think anything of it.) Because the temperature was in the single digits, I knew that AAA would be backed up. I made the call and hoped for the best. The whole experience ended up being a comedy of errors when they couldn’t get the wheel off the car and then the air compressor didn’t work to fill the spare. It took a couple of guys with various trucks 3-1/2 hours to get me back on the road. At least I was stranded at my son’s house rather than by the side of the highway.

At lunch I wanted to be here (thanks to Kathy and Molly for the photos):

But I was here: 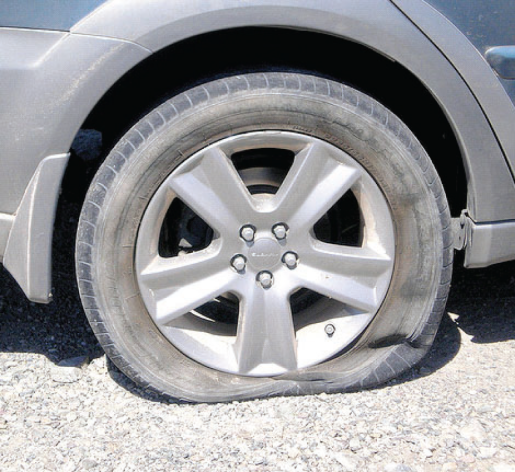 Once I was safely home, I decided to skip the New Year’s Eve party on my agenda. My husband was out of town and I had an airport taxi showing up at my house at 5:15 the next morning. Although there were two cars in the garage, I didn’t trust either of them to get me safely home at midnight. One was wearing the donut spare tire and the other one doesn’t like to start in cold weather….

Later in the day, Ann sent me a text that summed up the entire day.

Yeah, that pretty much says it all.

8 thoughts on “Flat Tires and Diabetes”