As someone on Medicare I’ve felt left out in some of my Facebook groups recently. In the Dexcom D5/G6 Users group and the DEXCOM G6 group, the vast majority of topics are about the G6. Do you like it? What is great? What is terrible? Adhesives, accuracy, and sensor longevity. Insurance and supply issues. The Tandem tSlim Pump group is all about Basal IQ with the majority of users stating that it is fabulous. There are questions about how it works and at what point basal insulin is suspended and then resumed. Stories about climbing Mt. Everest and others wondering about how to coordinate the prescription from their doctor, the training, and the software download. I don’t fit in anymore and I have no advice to give. In fact I am a little bored in these groups and mostly not checking in.

You see—I’m on Medicare. I don’t have the Dexcom G6 and my Tandem X2 t:slim pump is not updated to Basal IQ. I am not whining. Okay, maybe I am–just a little. But mostly I am just stating facts.

After weeks of rumors, it was officially announced on October 16 that Medicare will begin covering the Dexcom G6 for Medicare recipients. The nitty-gritty has not been worked out but it is estimated that April 2019 is a reasonable target date.

For those of us who have been involved in advocacy for CGM coverage by Medicare for years and who have been joyously receiving coverage since the second half of 2017, this announcement is welcomed but generates more questions than answers. I think that the more you know, the more questions you have. Addressing customers on the Dexcom G5, the news release states:

“Once G6 is available, Dexcom will be reaching out to current Medicare G5 customers when their transmitter is eligible to be replaced. Dexcom will also discuss the G6 and the Medicare beneficiary’s eligibility during routine monthly contact.”

That sounds very straight forward but I worry that it is not. The elephant in the room for those of us on G5 is The Receiver. In January 2017 after the initial approval of the Dexcom G5 by Medicare, I wrote a post titled “Medicare and CGM Coverage: Love Your Receiver!” and explained how Medicare justified the approval of the G5 as Durable Medical Equipment (DME) because the receiver had an estimated 3-year life. Therefore for those of us on Medicare, the G5 receiver has a 3-year warranty. Although we are now allowed to use our smart devices to read our G5 data, Medicare regulations still state that the smartphone is used “in conjunction with” the receiver. And FDA approval of both the Dexcom G5 and G6 requires a receiver to be provided as part of the initial bundle.

I have an old-style Dexcom G5 receiver that cannot be updated to G6 in contrast with the newer touchscreen G5 receiver that can be updated remotely to G6. Medicare through stupid regulations that I don’t understand does not allow Medicare recipients to participate in manufacturer upgrade programs. Thus Dexcom cannot give me the option of paying $100 or $25 or whatever to exchange my dated receiver for a touchscreen G5 or G6 receiver.

Technically my G5 receiver is warrantied for 3 years and I can’t upgrade it. Am I going to be able to switch to the Dexcom G6? Interestingly, the Dexcom press release only addresses the transmitter and makes no mention of the receiver. Without knowing the details of Dexcom/Medicare negotiations, I have no way of knowing my status. Is everyone forgetting the FDA requirement of the G6 receiver? Is Dexcom going to provide G6 receivers to current G5 users at no charge? Will I get a G6 transmitter and sensors without a receiver? IMO there is no way in h*ll that Medicare will pay for another receiver. Because the Medicare/Dexcom relationship is on a subscription basis, will all of the previous rules about upgrades be thrown to the wind?

As I said above, the estimate is that Dexcom G6 products will be provided to Medicare recipients starting in April of 2019. I have neither seen nor heard of specifics regarding this rollout. There are lots of discussions and rumors floating around Facebook but no one really knows. I have been on Medicare long enough to live by the mantra: “When I know, I’ll know. Until then, I won’t.”

If I were not using a Tandem X2 pump, I would not care much about using Dexcom G6. I look forward to an easier insertion and no required calibrations with the G6, but neither is a huge deal for me. But I really look forward to updating my Tandem X2 pump to Basal IQ which automatically shuts off basal with predicted lows. And then the future Control IQ 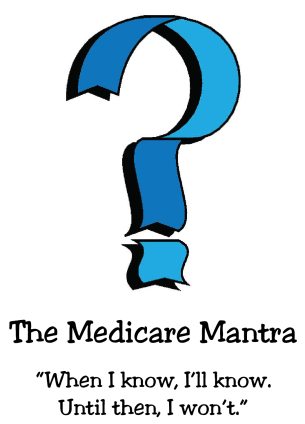 which will function as an early generation artificial pancreas.

“Dear Customer: As someone who, according to our records, has a t:slim X2™ Pump and also has Medicare for health insurance benefits, you may be aware that Medicare coverage of continuous glucose monitoring (CGM) is limited to viewing CGM data only on a Dexcom receiver and NOT a smart phone or an insulin pump.”

Since then I have heard nothing.

Frankly I think that the current Tandem policy regarding Medicare is: “Live and let live.” Some people are being told by their Tandem reps that it is okay to use their pump with Dexcom. But I do not think that is true because there has been no official announcement allowing the pump as a Dexcom receiver. At the same time there is no enforcement of the policy and Tandem is not sending reminder emails about Medicare. Although one part of me thinks that it is poor customer policy that Tandem is not communicating with Medicare recipients, the other part is okay with just ignoring the problem.

Unfortunately the problem of Tandem and Medicare will come to a head when the Dexcom G6 is distributed to Medicare users. Will we be allowed to download the Basal IQ software update (which requires G6) to our X2 pumps? Tandem has said nothing and unfortunately IMO it would be a total violation of current Medicare policies to allow the update.

Once again we don’t know the answers.

No answers to who, what, when, where, why.

Just a reminder to be patient and go with the flow…

Fingers crossed for the ability of those on Medicare to benefit from the latest and greatest in diabetes technology.

Until then, just remember the Medicare mantra:

** Please note that although Medicare Advantage plans must cover everything covered by Basic Medicare, they may have more flexible policies than Basic Medicare and provide more benefits. Currently some of these plans are already covering the Dexcom G6, but most are in line with Basic Medicare.