Last week I spent two hours updating my Blogroll.  The process began with a print-out of my current blogroll which I compared to my bookmarks for diabetes blogs in Safari. I found about 25 bookmarks which needed to be added to the list. One by one I typed in the name of each new blog and embedded the link to the website.

I had known for months that I needed to work on my blogroll, but the chore stayed at the bottom of my To-Do list.  What inspired me to finally tackle the project was the Wednesday, Sept. 3 DSMA TweetChat. The subject was whether the Diabetes Online Community (DOC) should have a governing body along with standards of conduct and lots of rules. No one seemed to think that was a good idea and the discussion moved to the topic of helping newcomers to the DOC find a foothold in the maze of diabetes social media.  Blogrolls were mentioned.

Blogrolls show up in many different forms.  Some like mine are long lists by category (Type 1, Type 2, Parent) with no description or rating of the blogs.  Others are shorter lists with titles such as “My Favorite Blogs” or “DOC Friends”.  One of my favorite blogrolls is by Scott at Rolling in the D because he has personalized his list with brief and occasionally witty descriptions of each blog/blogger. A nice feature on Blogger sites is a “live” blogroll that automatically updates with recently published posts.  Many DOC writers have chosen to not have blogrolls at all.

What is the purpose of a blogroll?  When I began reading diabetes blogs many years ago, blogrolls were a magical pathway to “meeting” other people with diabetes.  Without Twitter and Facebook, there was really no other way to learn about other websites.  The first blog I read was either Scott’s or Kerri’s and then it was a dot-to-dot adventure finding other people sharing their stories.  My guess is that newcomers to the Diabetes Online Community (DOC) still use blogrolls in this fashion while most blogrolls are largely ignored.  My blogroll had about 200 views in the last year.  I hope that some viewers used my list to find other blogs.  Unfortunately I suspect that most of the views were just by other bloggers seeing if they were on the list!

The main reason that blogrolls are impossible to keep current is because there are now hundreds of diabetes blogs and new ones appearing all of the time.  If you check out most blogrolls, you will find a dated list that highlights many established D-blogs while including few new blogs and being littered with many blogs that have been abandoned for years.

As an experiment, I checked out the blogrolls of the first twenty blogs listed in my Safari bookmarks.  I chose 3 favorite blogs in addition to my own to see if they were listed in any blogrolls. These 3 blogs are by prolific Type 1 writers who like me have been around for about 1-1/2 to 2-1/2 years. Of the twenty blogs I checked out, 5 did not have blogrolls.  My blog was listed on 5 out of the remaining 15 blogrolls.  Another fantastic newish blog was listed on only 3 blogrolls.  One was seen on 6 out of 15 and the last one had more presence being on 9 out of 15 blogrolls. These stats are not meant to criticize anyone; rather they emphasize how flawed most blogrolls are.  Even if you are able to keep adding all of the new blogs, when do you take an inactive blog off the list?  The ultimate criteria is probably when the link doesn’t work anymore.  But how old is too old?

When blogrolls were mentioned in the September 3 DSMA TweetChat, Scott Johnson immediately tossed out the question of the day. Typical of DSMA, the discussion quickly went off-topic and morphed into shrimp rolls and carb counts. 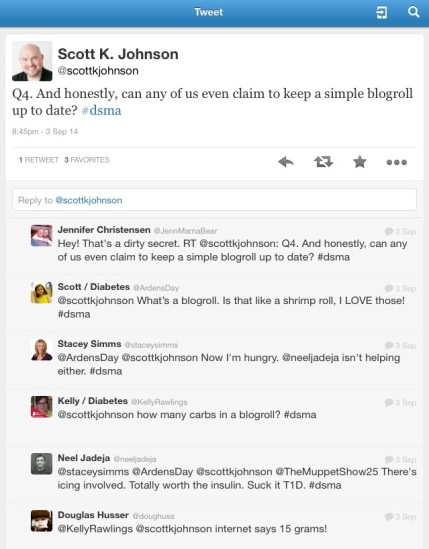 How do I feel about this?  On one hand, it is frustrating to be left off lists by people whom I know read my blog regularly.  At the same time, I know that it is meaningless because I don’t think blogrolls are used for much of anything and most of us rarely look at them.  So after this post I think I will go back to totally ignoring them.

Back to the September 3 DSMA TweetChat.  Although I don’t believe that the DOC needs a governing board or rules, I wonder if something like a DBlog Central website would be useful.  This site could maintain a complete and updated blogroll with descriptions and tags to help users navigate the DOC.  A central website could also be a hub for sharing information with all diabetes bloggers on things like starting a blog, finding diabetes graphics, Twitter names, current campaigns of the DOC such as Spare a Rose, and a calendar of events.

I can’t envision how something like this could be created.  Maybe we should have a governing board for the DOC and “they” could set up the website….  Yeah, right!  I think that most of us would say that the magic of the DOC comes from its somewhat chaotic nature and no one wants to regulate its constant evolution. Why should we change something that isn’t broken?

In the meantime I plan to continue to have a blogroll.  If you’re not on it and would like to be, please contact me.