For months I have been blogging about the roadblocks my husband has faced in getting a CGMS. He used one before going on Medicare, but a replacement system prescribed by his endocrinologist was denied by Medicare. We went through Levels 1, 2, and 3 of the Appeals process and had a hearing with an Administrative Law Judge on June 26, 2013. After being promised a decision in three months, we are  at seven months and still waiting for the judgement to be drafted so that we can find out if we got a “Fully Favorable Decision” or not.

In the meantime, I have been in contact with a Legislative Assistant of Representative Carol Shea-Porter [D-NH1].  In December 2013 Shea-Porter introduced a bill into Congress (H.R. 3710) which provides for coverage of Continuous Glucose Monitoring Systems by Medicare if recommended by a doctor. Unfortunately this bill is being given little chance of passing, but I believe it is an important step in bringing attention to the important issue of CGMS coverage for senior citizens.

I have also been in touch with the Global Marketing Director of Dexcom and she has indicated that together with Medtronic, they are forming a coalition to plan a big legislative push with respect to CGMS and Medicare.

I have been cautioned that it is too early to become excited about a speedy change in Medicare policy. But for me this is exciting news. I have gone from feeling totally alone in my crusade to knowing that a Congresswoman, Dexcom, and Medtronic are taking steps to influence Medicare to change the guideline.  For the many diabetics on Medicare who need a CGMS and can’t afford the cost of the device and sensors (my husband being one of them), there is a glimmer of hope that victory will be achieved now that some of the big-time players are becoming involved in the fight. 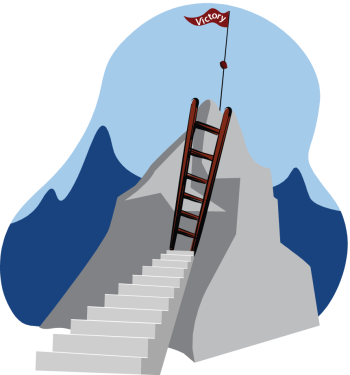 The steps being taken now are just baby steps and it is still a long way to the top of the mountain. There will come a time when I, together with many others, will need to have our voices heard. We will need a groundswell of support from the Diabetes Online Community to help change Medicare policy to provide for CGMS when medically necessary for senior citizens with diabetes.

Right now we are in the early stages of figuring out how to do this in the most effective way. I urge you to keep reading Test Guess and Go as we update our progress.  Please contact me if you have any information or contacts who will be helpful in pursuing this goal. If you are on Medicare (or will soon be on Medicare) and are concerned about your safety in living with diabetes without a CGMS, please reach out to me to add your name to my growing list of advocates.

Baby steps.  So small, but the first steps on the road to victory.