After my husband and I finished putting up the Christmas tree this morning, I discovered that my Dexcom G4 Share receiver was missing. We searched tree branches, boxes of decorations, upstairs, and downstairs and couldn’t find it. I knew that the receiver was somewhere in the house because I was getting numbers on my phone through the Share app.

My BG at this point was in the 140’s several hours after breakfast and normally I would take a correction bolus. Instead I ate a couple of glucose tabs and hoped that I would hear vibrating alerts as my BG passed over 160. No luck. My BG went up but we heard nothing. (All of my alerts are set to Vibrate.)

Once my BG hit the stratosphere, I gave up on high alerts. My only recourse was to drop below 55 and get the mandatory audio alert. I injected a mega-dose of insulin and got ready for the gluco-coaster ride. Don’t try this at home, Kids.

It took a while but eventually I was below 100 with double down arrows. About this time my husband asked if an ambulance ride would cost more than replacing the receiver. I explained that I had reached my deductible for the year so emergency care would be free…. Then I assured him that I would be okay and ate a couple of Smarties to control the BG drop.

We didn’t hear vibrations as the BG dropped below 70. So it was 55 or Bust!

Finally we heard muffled audio beeps, but we couldn’t figure out where they were coming from. Certainly not near the Christmas tree or the couch or the many boxes where I expected to find it. I’m not sure how many minutes separate each series of alerts—maybe about ten. Finally on the 3rd or 4th round of beeps, we found the receiver upstairs in the pocket of my pajamas.

This should be the end of the story, but it is not. The reason that I had not checked upstairs is that I had been on a 40-minute walk long after getting dressed. I had seen reasonable BG numbers on my Apple Watch while walking and given no thought to the idea that the receiver was not with me.

It turns out that obviously my receiver was upstairs all morning and the number I was seeing on my Apple Watch was from the Watch Sugar app. When the Dex Share app on the phone and watch loses contact with the Dexcom receiver, it displays blank dashes instead of numbers. Had I been using this app during the walk, I would have noticed a problem. But I was checking my watch face with the Watch Sugar complication. Well, I learned today that the Watch Sugar app will keep displaying the last number received whether it is 30 seconds ago or 5 hours ago.

Once my BG returned to normal according to my meter, I turned off the Dex receiver for 20 minutes. As expected, the number 46 for Watch Sugar never changed while the Dexcom Share app (not shown on watch face) quickly showed no data. Hypothesis confirmed. 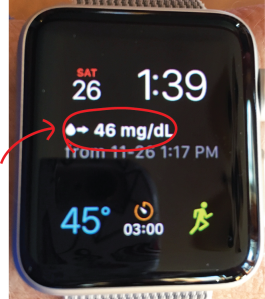 Everything is now fine in Diabetes Land.

I found my Dexcom receiver.

My post-Thanksgiving low carb diet got blown to bits with glucose tabs, Smarties, an apple, a pear, yogurt, and an English muffin.

I learned that it is better to keep the Dexcom app open on my watch rather than rely on Watch Sugar.

Just another day with Type 1 diabetes.

Postscript:  Sometimes I think I have little control over my diabetes. Today I felt totally in charge of what I wanted my blood glucose to do. I never felt that I was doing anything dangerous. I was not alone and I had lots of orange juice and glucose tabs available. That being said— please remember that nothing you read on this blog should be considered medical advice or even good advice.

3 thoughts on “Not FDA Approved”