For the past few months, I’ve been working on Level 4 of the Medicare appeal for my husband’s CGM. It finally went in the mail to the Medicare Appeals Council (MAC) at the beginning of April but I needed a few weeks to clear my brain after weeks of trying to get this appeal in order. Fortunately, for this level, I was able to find an attorney who drafted the appeal. There was a lot of back and forth to get it right and I was thrilled with the end results. The argument is that Medicare’s regulations clearly indicate that blood glucose monitors are covered if (1) the patient has diabetes; (2) the patient has been trained in how to use the device and is capable of the same; and (3) the device is designed for home rather then clinical use.  Included in the appeal letter were 130 pages of attachments displaying that CGMs are recognized as the standard of care for brittle diabetics not only within the United States, but internationally. I have been told that the wait to hear from the MAC can be anywhere between three to six months but our attorney has indicated that if the wait is longer then three months, we’re going to escalate it to District Court. Future blogs will keep you informed of what’s happening.

But now onto an interesting article that was recently in the Tampa Bay Times. The headline was “Low blood sugar cited in death of prominent community leader’s husband after Tampa police traffic stop.” If you would like to read the entire article, you can follow this link.

To give you a synopsis of the article, Officer Anthony Portman received calls of an erratic driver who was swerving onto the sidewalk and into a stop sign. When Officer Portman arrived at the scene and asked the driver, Arthur Green Jr. 63, to hand over the keys, Mr. Green became combative. Officer Portman called for backup and then called for Tampa Fire Rescue to send medics. When Cpl. Matt Smith, the backup officer arrived, he indicated that he had seen diabetic incidents before and suspected that this what Mr. Green was having, but because Mr. Green was resistant, the officers restrained him with handcuffs. At that point, Mr. Green stopped breathing. The officers attempted to give Mr. Green CPR but when the Fire Rescue arrived at the scene, Mr. Green had no pulse. He was transported to St. Joseph’s and after 19 minutes of trying to resuscitate Mr. Green, he was pronounced dead. He had a blood sugar of 29.

A few days after receiving the article, Laddie, my fellow blogger, sent me an email and asked what I thought about the incident. Both Laddie and I agreed that we had no idea of what Mr. Green’s diabetes history was. In pulling up whatever information I could about this incident, I do know that Mr. Green was not wearing a medical bracelet. There is no mention in any of the articles that I’ve read that Mr. Green had a CGM so I am assuming that he did not have one. The main issue of most of my blog posts is Medicare and their denial of coverage for the CGM. Mr. Green does not seem to fit in with this since he was 63 years of age and unless he was on Social Security Disability, he obviously wasn’t on Medicare. 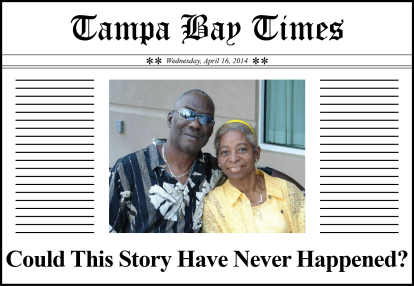 After thinking about this situation for a few days, I decided that the broader issue is that this man died because he didn’t have a CGM. Had he had one, he would have been alerted of his falling blood sugar in enough time to make a correction to get his blood sugar elevated. The reason why he didn’t have one isn’t the important part of the story.   It’s the fact that he didn’t have one. It proves the point that the CGM is a lifesaving device and that anyone, whether young or old, on Medicare or not, could be saved from a preventable death with the use of this device.

This could have been my husband. He’s had quite a few incidents where the same thing could have happened to him as happened to Arthur Green Jr. Call it luck or a higher power. My husband has been fortunate enough to have been stopped by officers who recognized immediately that he had a medical problem (he does wear a medical alert bracelet) and notified EMS quickly enough for them to get to the scene and administer glucagon (a hormone that stimulates your liver to release stored glucose into your bloodstream.  It is used as medication to treat someone with diabetes that has become unconscious from a severe insulin reaction). He does not have a CGM presently. This has been what our 1 ½ year long appeal has been about.

Entertainment people always say that any press is good press whether it’s positive or negative. So in this instance, The Tampa Bay Times calling attention to the unnecessary death of Arthur Green Jr., as sad as this death is, calls attention to the fact that this can happen to any diabetic at any time. If only Medicare would be aware of this incident and understand that those people who are asking for coverage for their CGM are not doing it because they want another piece of equipment to attach to their bodies. They just want to assure themselves that they are safe and able to keep others safe as well.

It’s so difficult to understand why Medicare just doesn’t get it.  IF ONLY they did.